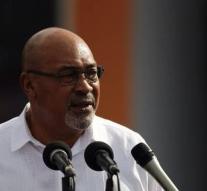 - The Surinamese government and some related organizations have become the target of a cyber attack. Wednesday after the government website was shut down, were Thursday the National Democratic Party of President Desi Bouterse and the Surinamese Bank's turn. Reported that the local news Star News.

The hackers operate under the name Anonymous, but it is unclear whether it is the same international hacker collective. In an e-mail to Star News stated the hackers that their action was a protest against the government of Suriname. 'The Surinamese people are sick of this bad and corrupt government, so we have taken over all government sites. The people fight back, 'they write.

The group conducted a so-called DDoS attack. Thereby flooding computers, a server with numerous requests, which becomes saturated and the site is flat. The government announced that government data have not been compromised in a statement.