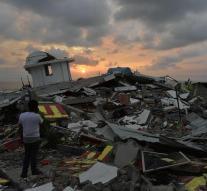 - The number of people killed by the earthquake that struck Ecuador Saturday, has risen to certainly 350. More than 2000 people were injured by the quake, which had a magnitude of 7.8 on the Richter scale. President Rafael Correa said Monday he fears that the death toll will rise further.

The epicenter was off the coast, about 20 kilometers deep, but the quake was felt hundreds of kilometers away yet in the capital Quito. Buildings collapsed, roads were impassable and in many places the power went out.