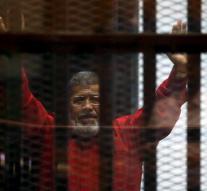 - The Court of Cassation in Cairo on Tuesday rejected the death penalty against the former president of Egypt Mohamed Morsi. The trial against the 65-year-old politician from the Muslim Brotherhood must, so certain the court.

Which have had legal sources in the Egyptian capital know.

Morsi was elected president in 2012 and deposed by the army in July 2013. He was brought to court for incitement to murder, spying and violence. In 2015 he received the death penalty.