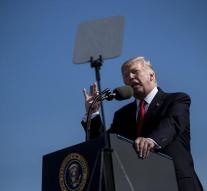 washington - The US Supreme Court ruled on Monday that President Donald Trump hopes his infamous ban on entry for thousands of refugees will continue.

The Ministry of Justice had urgently asked for a previous judicial verdict to be suspended provisionally. Today, it was matched by the highest US college.

The court of appeal in San Francisco had blocked Trump's plan, to temporarily refuse the majority of refugees from the United States. The court ruled last week that the government should also allow grandparents, aunts, uncles and cousins ​​and cousins ​​of people who are already residents of the United States for the time being in the country.

The Supreme Court will be discussing the matter next month to determine what is going to happen in this matter.