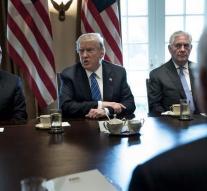 washington - The US Supreme Court has given permission to President Donald Trump on Tuesday to implement his planned entry ban for refugees.

The judges closed a blockade on Tuesday following a federal ruling, which according to the Ministry of Justice would allow 24,000 additional refugees to enter the United States.

The court of appeal in San Francisco had Trump's plan to temporarily block most refugees from six Islamic countries. Refugees who had previously been granted permission to come to the US had to be admitted. The Ministry of Justice decided to appeal this ruling to the Supreme Court and received it on Tuesday.

Justice has not been appealed against the statement that grandparents, aunts, uncles and cousins ​​and cousins ​​of people who are already US residents are temporarily admitted.