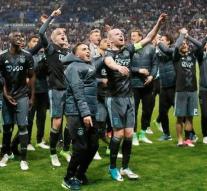 amsterdam - Ajax supporters hunt massively for the final of the Europa League between their club and Manchester United. On the internet, tickets for the final match of 24 May in Stockholm change for 1500 euros from owner.

Ajax starts Monday with the sale of the 10,000 allocated ticket tickets. Loyal fans with a so-called 'outcard' get priority. Flights from Amsterdam to Stockholm are already scarce and expensive. For a round trip around the finals, you are now paying 500 euros. It is expected that charters will be used. Ajax's travel partner also says that he will soon come up with new information.

Many Ajax supporters fly through Belgium and Germany to Stockholm, sometimes even with several transfers to cities like Riga. Of course, by car to the capital of Sweden, even though the distance from Amsterdam is about 1400 kilometers. Hotel rooms around the finals in Stockholm are pricey, soon 400 euros per night. It is cheaper to stay near the capital or book anything through Airbnb.