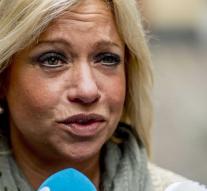 brussels - It is easier to transport military equipment and personnel through Europe. A proposal for a 'military Schengen area' by Defense Minister Jeanine Hennis has been welcomed by countries such as Germany, France, the United Kingdom and the US, told the governor Thursday after consultation with her NATO colleagues in Brussels.

Now time-consuming licensing procedures are needed, but in order to speed up troops in a crisis, technical, logistical and financial obstacles must be eliminated, Hennis kept her colleagues. 'Because we must be able to move quickly to any place where there is a threat. '

'It is important to coordinate military transport in Europe, to ensure that units and equipment are in the right place, regardless of whether they are deployed in EU or NATO affairs,' said Hennis. She has asked the EU and NATO to find out what the possibilities are. In the autumn, both organizations will work together for the first time. 'Cooperation has never been so strong,' said EU Foreign Minister Federica Mogherini.