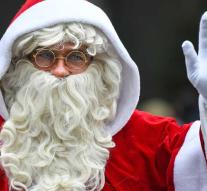 london - A gender neutral Santa, with a few tattoos on his arm? The gray children's friend may look very different in the future.

More than a quarter of more than four thousand respondents from the United States and the United Kingdom want a gender neutral or female Santa. According to twenty percent of the respondents, he may also have tattoos and an iPhone.