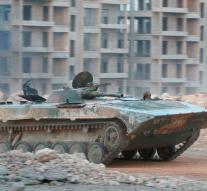 - Syrian government forces have gained ground Tuesday on rebels in the southwest of Aleppo and thus cut off a supply route for insurgents in the east of the city.

That Syrian media reported on the basis of the regime. The army offensive was supported by heavy air strikes on the rebels.

Rebels in Aleppo said Saturday broke the siege of the town by government forces. The claim of the Government of Tuesday is notable because government media over the weekend achieved gains just downplayed by the rebels. The Syrian Observatory for Human Rights, which relies for its coverage of activists on the ground, could not confirm the claim of the army.