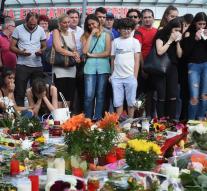 - German police have arrested a man who firearm would have provided that the eighteen year old Ali David Sonboly last month nine people dead and shot himself in a shopping center in Munich.

Buyer and seller would have come into contact with each other through darknet, a layman difficult to access part of the Internet. The 31-year-old suspect, who was arrested Tuesday in Marburg, betrayed himself when police posing as a customer.

The man known Sonboly in May the murder weapon, an innocuous to prop reforged gun that was usable again, to have sold. Four days before the depressed teen in mall Olympia gave a massacre, moreover, the accused gave him some ammunition. The dealer had to arrest a loaded pistol in his pocket.


The investigation Sonboly's motives are still pending. He would have mirrored the Norwegian right-wing extremist Anders Behring Breivik and the perpetrators of massacres at schools.