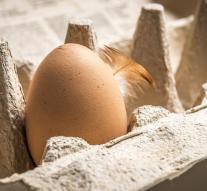 brussels - Albert Heijn also removes eggs from his shelves in his branches in Belgium. It concerns eggs from the Netherlands, a total of 25 of the 38 species offered. Supermarket chains Colruyt and Delhaize have also taken measures, say spokesmen for press agency BELGA Friday. There would be no danger to public health in any of the chains.

At Colruyt last month and August 2, a limited number of eggs were taken from one supplier, according to a spokeswoman. 'In total, it was 1 percent of the number of eggs we normally sell in a week. 'Delhaize took out preventive eggs from their own brand on Wednesday morning.