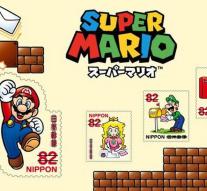 tokio - Japanese people can decorate their letters on Wednesday with stamps about Super Mario. A sheet consists of ten stamps, with pictures of Mario, Luigi, Yoshi, Toad and Princess Peach. Each seal has a value of 82 yen, converted 64 eurocents.

The stamps are only available in Japan. There are two million sheets printed, so a total of twenty million stamps. Letters sent with the Mario stamps also get a Mario stamp.

The stamps show, among other things, that Princess Peach writes a letter, which is then read by a silent Mario. Toad is the postman of service. On the final seal of the skin Mario gets a kiss from Princess Peach.

Japan Post had earlier stamps from, among others, DragonBall, Naruto and Hello Kitty.