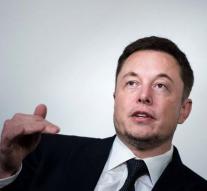 los angeles - The Netherlands still has the chance to develop the super-fast 'vacuum train' that Hyperloop One wants to develop. That lets the company know. The company will fully support ten other candidates, with money and knowledge, to make their plans reality. In addition, there are eleven projects, including those of the Netherlands, who are given the opportunity to further develop their proposals.

The hyperlip is a closed tube, where a capsule passes through passengers or freight. Due to low air resistance, such a capsule should be able to reach speeds of more than 1000 kilometers per hour. It is an idea of ​​Elon Musk, the man behind Tesla car maker, PayPal payment service and SpaceX spacecraft.

The Netherlands wants to create such a round between Amsterdam, Rotterdam, Eindhoven, Den Bosch, Arnhem and Lelystad. This route is 428 kilometers long, a distance that can be achieved by Hyperloop One in just over 40 minutes. The longest part, the 111 kilometers from Rotterdam to Eindhoven, would be in ten minutes.

Hyperloop One initially received 2600 entries. A few months ago, it was reduced to 35 candidates. Hyperloop One will focus on ten contenders. Two of them are in Europe: Glasgow-Liverpool and Edinburgh-London. The United States, Canada, Mexico and India are still in the race. The eleven 'losing finalists', including the Netherlands and Germany, are also able to hug a lot of hope.

Minister Schultz (Infrastructure) had made a good word for the Netherlands at a special conference in Amsterdam. Hyperloop One also quotes from her speech in which she mentions the hyperlip a new way of traveling: 'Fast, quiet, innovative and sustainable. Solar panels may be the only means of transport that generates more energy than it costs. '

Hyperloop One is not the only company that runs the hyperlink. For example, the Delft student company HARDT wants to build a special test track in Flevoland, supported by NS and the Ministry of Infrastructure and Environment. The students won a prestigious competition in the United States this year.