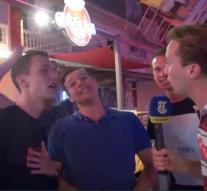 malia - At less than ten minutes drive from the 'Dutch colony' Hersonissos keep British youth their party holiday. Here it is all about shamelessly by drink until you fall over. Sodom and Ghomorra exists. The only hot Malia.

The main resort of Malia in Crete is all about the British holidaymaker. When all the pubs they send 'catch-up' matches of Manchester and anywhere there is colorful lights to lure in customers. When clubs are girls with almost anything used to seduce men. Near pub Big Ben is the liquor store even renamed 'indrinkwinkel.

A young man from Bath, who works at a resort, warns us upon arrival in Malia. 'This you have never seen. Everyone throughout the day here runs drunk on the street, 'he says. It does indeed not long before the first jet tanked types cross our route. Soon we see the slightly too scantily clad ladies. Not on the street but raunchy dancing on the table.


02. It is 30 hours. As the night progresses, it goes from bad to worse. Everywhere stumble drunk Britons through the streets, comazuipers up for grabs and it does not take long for the revelers witness riots.

The only ambulance Malia does not seem to keep up with the clientele. If another woman is knocked out, the group of bystanders outraged when the car with siren and flashing lights drive past. Apparently there are more candidates in the street...

Right in the entertainment strip is first aid. That seems an odd location, but for overnight, there appears to be a reason. For the door at times rows of 'customers'.


Police have seen no control over the situation. Everywhere the music hard. Once runners pass by motorbike or car, clubs receive a call, the music goes off. After a few minutes takes the British bar staff reopened the volume button.

Three girls from Leeds love it. 'Hersonissos is too luxurious and expensive. Our secret weapon is that we are always drunk, 'said one of them. A Greek employee at a restaurant: 'They are very extreme here. Drunk up to forty hours a day. 'She nods, shaking her head.