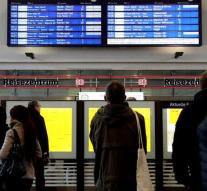 amsterdam - Dutch train passengers can travel to Berlin on Sunday. However, they still have to take into account a transfer in Hanover. That's what the NS reported. On Sundays, there are normally six intercity between Amsterdam and the German capital between 7.00 and 17.00.

Train traffic in northern Germany came to a standstill due to storm damage on Thursday. In many places the overhead line was destroyed and trees were laying on the rails. At Bad Bentheim, just past the border at Oldenzaal, the same day, the train from Amsterdam went to Berlin. The passengers were picked up in a sports hall.