Home / World / Summit in Paris on the future of Mosul 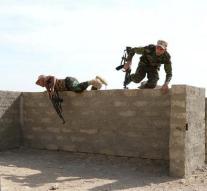 - France invests Thursday with Iraq a summit in Paris to discuss the future of the Iraqi city of Mosul as Islamic State is expelled there. That said, the French Foreign Minister Ayrault Tuesday.

Ayrault warned that the battle for Mosul may take considerable time and that it is likely that the extremists will then retire to the capital of their self-proclaimed caliphate, the Syrian city of Raqqa. He believes it is therefore important to determine how well Raqqa can be recaptured.

'It will take time and political beliefs, but we have to get in line. We can not allow them to reorganize themselves Islamic State and gaining strength. '

It is expected that the United States, Great Britain, Saudi Arabia and Turkey to participate in the summit. Iran and Russia are not invited because they are allies of Syrian President Bashar al-Assad.