Home / World / Summer without beer? This is the culprit 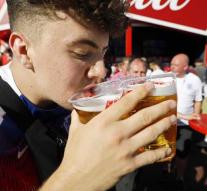 moscow - Have you planned barbecues, parties or an evening of World Cup matches in the near future? Then it could just be an alcohol-free version. The beer stock is seriously threatened by a shortage of CO2, writes CNN, and beer brewers sweat carrots for the coming weeks.

Europe has recently experienced a major shortage of carbon dioxide, which is used to bring the 'bubbles' into different drinks. The drought comes at an inconvenient time, because summer is traditionally the time when brewers can peak.

Once every four years, brewers even experience a super summer, when a world championship football is finished, and people all over Europe gather in bars and cafés. 'This is exactly the wrong time', confirms Brigid Simmonds, chairman of the British Beer and Pub Association.

The shortage of carbon dioxide is a result of large-scale problems in the production of ammonia, which is used to obtain carbon dioxide. Several production companies of ammonia have recently been closed, while the high price of natural gas would not help to open them again soon.

Because in the coming weeks probably only small amounts of ammonia will enter the ports of Rotterdam and Antwerp, the carbon dioxide crisis could take serious forms, insiders fear. 'The CO2 companies are actually tied to hands and feet, and beg the ammonia producers not to close the tent,' said Richard Ewing, an ammonia expert.