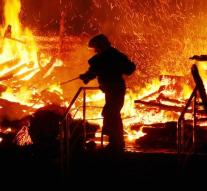 odessa - Three girls were killed by a fire in the Ukrainian port city of Odessa. The fire raged in a summer house's wooden holiday home.

The victims were between eight and twelve years old. 39 other children were able to escape through a window. Several of them suffered fractures or smoke poisoning. The caregivers suspect that the keeper of the camp had enclosed the children in the evening, which meant they did not have a good escape route.

The house itself did not suit everything, among other things, the electrical wiring was messy. The smoke detectors were not turned on and no water came out of the faucet.