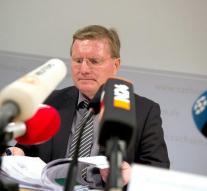 dresden - The suicide of the Syrian terror suspect Jaber al-Bakr in a prison in Leipzig was not foreseeable according to the Saxon Minister of Justice Sebastian Gemkow. It was all done to prevent it, said the CDU politician, who see no reason, said at a press conference to resign.

Al-Bakr hanged himself in his cell with his T-shirt, said prison director Rolf Jacob. Initially each quarter was checked how he was ready. Wednesday afternoon, after consultation with, among others, a psychologist decided to extend the interval to an hour. A jailer presented Monday at an early inspection round at 19. 45 hours- minutes after the previous audit- had robbed that al-Bakr own life. It was tried to resuscitate him, but without success.