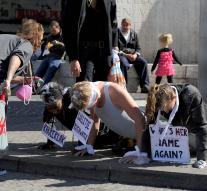 gent - A first year student at the University of Ghent has committed suicide, presumably because they did not want to participate in a hazing activity of the student VRG. There is established a judicial inquiry and all activities related to baptism, such as the hot hazing in Belgium, have been shut down.

The Latest News wrote Friday that the girl committed an act of desperation. She would not have wanted to participate in the activity, but have a farewell letter written instead, with an entry into spatial data. That stands for the Law Society Flemish Ghent. The student died Tuesday already. The circumstances surrounding her death are being investigated.

It is not the first time that the association is negative news. In October last year, five students ill after they ate porridge in which raw meat was processed during the hazing. The association was then suspended a month. In addition, the university determined that its recognition would be withdrawn if the next five years, a " serious infringement of the baptismal decree ".