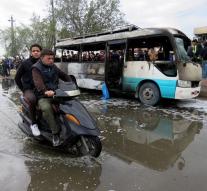 baghdad - Suicide bombers with firearms and have bomgordels Monday two police attacked in the Iraqi city of Samarra. According to the security services are therefore killed at least seven agents. Certainly two perpetrators blew up.

Earlier in the day, Baghdad was rocked by a similar act of terrorism. An unknown person brought in the predominantly Shiite district of Sadr City detonated his car. There were at least 37 dead workers but also some policemen.