Home / World / Suicide attack during the parade in Kabul 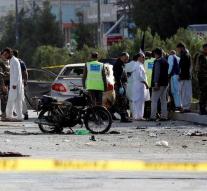 kabul - Because of a suicide attack during a parade in Kabul, at least seven people were killed, 25 were injured. A terrorist on a motorbike, according to the authorities, blew up a procession in memory of the Ahmad Shah Massoud, who was murdered in 2001, a mujahideen commander who played a heroic role in expelling the Soviet army from Afghanistan.

Earlier in the day, aggressive Massoud fans caused unrest in the Afghan capital with gun bursts. They shot in the air with automatic weapons, although the local government had banned it. There were certainly thirteen injured.

With parliamentary elections coming next month, the rivalry between ethnic groups in Afghanistan is growing. The annual commemoration of Massoud created a tense atmosphere in Kabul. Large streets were blocked by the police.