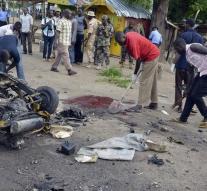 abuja - On the island Kouloukoua in Lake Chad are Saturday at least thirty people have been killed and more than eighty people were injured in a triple suicide attack on a market. This was reported by the French news station Radio France Internationale.

It would be an attack by Boko Haram. Those Muslim terrorist attacks committed earlier on islands in Lake Chad because they are strategically located as a base for attacks. Lake Chad borders Chad, Niger, Nigeria and Cameroon. Boko Haram, which has links with Islamic State, is headquartered in Nigeria.Chad extended a state of emergency in the area last month when twelve people were life come by a double suicide bombing. Earlier this year, examined thousands of people fleeing Boko Haram refuge on the island. It is not clear whether these are all still there.The UN Office for the Coordination of Humanitarian Affairs said this week that more than 50 000 displaced people since late July had arrived in the region.
NEW