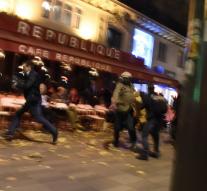 - Former VVD minister Ed Nijpels with his wife is a weekend in Paris and was eating in a restaurant just a few hundred meters from the palace of the French president when the attacks occurred.

,null, Suddenly, the waiter arrived with the bill and I saw everybody grab his phone. I also looked at my phone and saw the alerts come in. When I realized what was going on. Everyone had as soon as possible outside and the restaurant was closed. ''

Ed Nijpels continues:,null, Once outside, there was great hustle, because everyone wanted a taxi to get away as quickly as possible. Taxis were obviously get no more. When I walked to my apartment. ''

Meanwhile, Ed and his wife are safe in the hotel room.