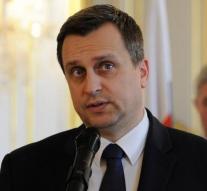 bratislava - The second largest government party in Slovakia held a surprising cabinet crisis on Monday. Andrej Danko, the leader of the right-populated SNS, informed his coalition partners in writing that he ended the cooperation with the Smer-SD and Most-Hid after almost a year.

Social Democrat Prime Minister Robert Fico called Danko's decision an 'absurd step' which is absolutely not conducive to social rest and stability. He had a meeting for Tuesday and hoped to hear from Danko what his motives are.

Bela Bugar, the foreman of Most-Hid (Bridge) representing the Hungarian minority in Slovakia, was also unpleasantly surprised and wanted to explain. The break may require new elections. According to the polls, the current coalition would lose its majority in parliament.

The SNS was recently faced with allegations of corruption at the Ministry of Education, Science and Research, which the party has in her portfolio. Liberal opposition leader Richard Sulik felt sorry to draw attention to an imminent scandal.