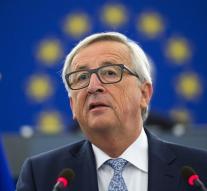 brussels - The threshold for European political parties and foundations to receive EU funding is increased. The European Commission wants the conditions to be tightened up.

'We should not fill the bags of anti-European extremists,' said commissioner Jean-Claude Juncker this week. His second man Frans Timmermans presented the official plans on Friday. He stressed that 'in no way' is the intention to dictate what the progamma of European parties should be. 'The parties are free to say what they think, even against the EU. That is democracy. But the current rules are causing abuse. '

In case of an application, serious support from national parties must be found in at least seven Member States. The funds should also be 'fairer' based on the election results. In the case of fraud, it will be easier to recover the grant.

The European Parliament and the Member States have to approve the proposal.