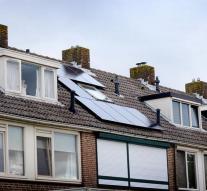 - Sixty million euros of subsidies that the government has made available for more energy-efficient housing is almost almost one year ahead. The majority of the subsidy was intended for homeowners and has already been exhausted, reports the Volkskrant. Only Associations of Owners (VvEs) still claim eligibility.

Individuals who want to make their homes more energy efficient by isolating better received a grant of up to 15,000 euros. In total more than nine thousand homeowners have made use of the subsidy. The newly formed cabinet determines whether the subsidy pot is being refilled.