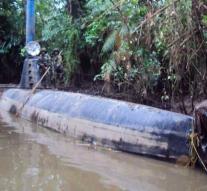 bogota - Colombia seized a submarine off the coast with two tons of cocaine on board. The vessel was intercepted by naval ships after a one-hour offshore yacht in the Pacific Ocean, the justice department reported Saturday.

The market value of the drugs is estimated by the authorities at around $ 68 million, approximately EUR 58 million. Two Mexicans, an Ecuadorian and a Colombian have been arrested.

The navy found the submarine off the coast of the delta area of ​​the Sanquianga River, some 550 kilometers southwest of the capital Bogota. Increasingly, submarines are diving on the coast of Central and South America that are used for drug smuggling. At the end of April another submarine was intercepted off the coast of Guatemala.