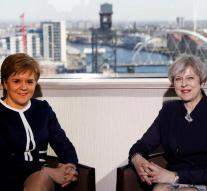 glasgow - The Scottish Prime Minister Nicola Sturgeon said Sunday that if the Scottish National Party (SNP) wins the elections on June 8, her British colleague, Theresa May, can no longer refuse a referendum on Scotland's independence. That statement is no longer sustainable, said Sturgeon in an interview with the BBC.

The SNP conquered 56 of the 59 Scottish parliament seats last year. Again this time, the polls point to an easy victory of the nationalists. According to Sturgeon, this must lead to a new parliamentary debate on parting as soon as the terms for the brexit are clear. The Scots voted in majority against the withdrawal from the European Union.

In 2014, they still managed independence from Britain. May does not think it's time to talk about a Scottish referendum again. Sturgeon noticed that the British Prime Minister changes his mind more often.