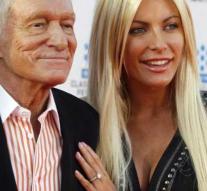 los angeles - A typewriter from Hugh Hefner has delivered more than $ 162,000 (over € 143,000) at an auction in Los Angeles. There fans and collectors offered stuff from the Playboy founder, who died last year at the age of 91.

At the auction at Julien's Auctions, among other things, well-known Hefner garments went under the hammer. A white captain's hat exchanged for more than USD 19.000, a red tuxedo jacket yielded 41. $ 600. Comedian Jim Belushi put over $ 3100 on the table for the script of an episode of Saturday Night Live that was presented in 1977 by Hefner.