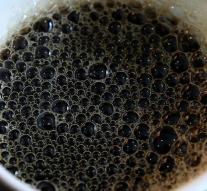 los angeles/london - Drinking coffee is not so bad yet. Extensive research in the United States and Europe has shown that three cups of coffee per day significantly increase the chance of a longer life. The findings of the two studies were published on Monday evening in the Annals of Internal Medicine.

According to US research, reduced to 185,000 people, the risk of premature death is 18 percent lower if you drink two to four cups of coffee a day. These findings are endorsed by European research, with more than 520,000 surveyors in ten different countries the biggest research ever into the relationship between coffee and dying.

A cup of coffee a day already has a positive effect on health, but in three heads the profit is greatest. Then the risk of liver, heart and kidney disease is significantly reduced, according to the researchers.