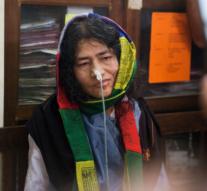 - An Indian human rights activist who refused to eat for almost sixteen years has ended her hunger strike. Irom Sharmila throws it a different tack and took the judge once her freedom back. Who wants to use them to go into politics, Indian media report.

Sharmila went on hunger strike in 2000 to reinforce its opposition to the increased powers of the military in the fight against separatist movements. They denounced the crackdown by the authorities in the state of Manipur, where she lives. The activist was then picked up and fed for years under duress.

Her lengthy protest did not return, Sharmila observed Tuesday. They promised to eat and asked for a bail arrangement, which the court granted her. After her first bite honey she announced to make a bid for the premiership state of Manipur.