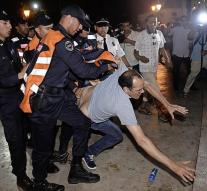 the hague - The difficult relationship with Morocco has been degenerated in a diplomatic crisis. The North African country announced this weekend to recall the ambassador to The Hague. The Dutch cabinet reacts bewildered.

Morocco says it is a step because the Netherlands refuses to deliver a suspected drug crimineel. According to Moroccan media, it is about former parliamentarian Saïd Chaâou. It would have both Dutch and Moroccan nationality. In addition, Rabat also claims that this man is involved in the financing of the current vehement protests against the government of the North African country.

The Hague sources report the Telegraph that Morocco suddenly increased the pressure of extradition last week. The extradition request has been running for a long time, but just as the protests are being recharged where the sought-after Chaâou would be behind, this diplomatic pressure came to a peak.

The Netherlands does not respond officially to individual cases, but behind the scenes it is told that Morocco did not meet the demands for extradition. Thus, the country was low on paper, but it mainly came with telephone guarantees. This while the Netherlands claims that for example, the right to a fair trial and warranties about safe circumstances in prison is promised on paper.

The government reacts with the incomprehension of Morocco's step. 'The Netherlands is committed to effective cooperation with Morocco, based on international legal frameworks and protection by the rule of law', according to the relevant ministries in a joint statement. 'In that light, the Moroccan statement is incomprehensible and unnecessary. '

The diplomatic relationship between the Netherlands and Morocco has been extremely difficult for a long time. For example, the export of benefits is time-consuming.