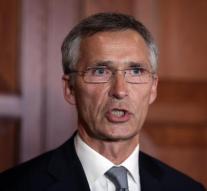 The ministers discuss proposals in the Slovak capital for closer defense cooperation, such as joint development, procurement and a European military headquarters for peacekeeping missions. All Member States to ensure that there is duplication with NATO, says Stoltenberg. He took this wind out of the sails of the United Kingdom, which says everything that smacks to veto a European army.

Several ministers and EU foreign policy chief Federica Mogherini again emphasized that such an army is not at issue. Mogherini hopes that the proposals in November are ready, so that the heads of government in December to make decisions.