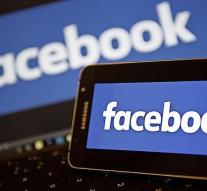 That concludes ABN Amro. Google and Facebook have always attracted most online ads to competitors hardly succeed to steal market share away there. In the United States, for every dollar companies online marketing spend 83 cents to Google or Facebook.

The growth in advertising revenues of Google between 2012 and 2015 was 32%, when Facebook went turnover over those years two and a half times up.

In 2011 was about $ 1 billion in revenue from web advertisements, in 2018 thrust the whole market according to ABN Amro by the $ 2 billion mark.