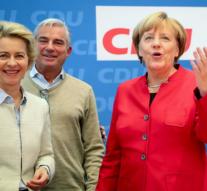 - The CDU celebrity Thomas Strobl found that sick asylum seekers should be sent back to their homeland. Those who can not travel, can stay. But who is ill can make the outward journey must be able to also return, is his message.

Strobl (56) Interior Minister in Baden-Württemberg and deputy chairman of the CDU, the Christian Democrats of Chancellor Merkel. He made the statement Monday in a German newspaper. Not only the opposition is indignant. Even within his own CDU sounds opposition to his rule.

' Who the arduous journey across the Mediterranean or through the Balkan route and diseased managed ready to play and who established that he can not stay, it you have to wonder in all utterance, whether it is impossible for him back with a plane to send. 'The Minister also proposes to extend the expansion possibilities for rejected asylum seekers, reduce benefits and Egypt to establish a regional center return.