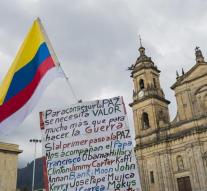 bogota - Colombia has spoken very surprising in a referendum on the peace agreement with the FARC. Colombians say with 50.24% 'no' to the agreement to put an end to 52 years of war and to ensure that can return the FARC fighters into society.

With more than 99 percent of the votes counted is a slight majority of 50.24 percent against the agreement, and 49.76 percent for the peace treaty, reports AFP.

Opinion polls had originally predicted a big victory for the 'yes' camp that the agreement supports that President Juan Manuel Santos was able to connect with the rebels. Polls were talking about a two-thirds majority that would vote for, but the preliminary results show a very different picture. The referendum is valid if about 4.5 million Colombians cast their vote.

The impact of the unexpected 'no' are unclear.