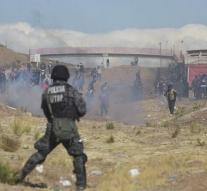 - Striking miners in Bolivia on Thursday beaten to death a deputy minister. He was captured by the strikers after he had come to talk about their grievances. A day earlier, two miners were shot dead by police.

According to Interior Minister Carlos Romero was his Minister Rodolf Ilanes (55) on,, brutal and cowardly murdered '. Defense Minister Reyi Ferreira said Ilanes,, was tortured to death. ' An employee of Ilanes had managed to escape and was taken to a hospital in the capital La Paz. Ferreira said there were arrested around a hundred people.

Ilanes was Thursday at Panduro, 160 kilometers from La Paz, went to talk to the strikers. Organized miners run for weeks cooperatives action against a new mining law. In one of their roadblocks came Wednesday to violence.