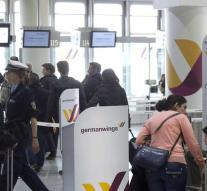 dusseldorf - A strike by security personnel at several German airports has confused the travel plans of about 110,000 people. Travelers at the airports Düsseldorf, Cologne / Bonn and...

The strikes of a full day are 'exaggerated, ruthless and irresponsible', according to the ADV. Not only do they cause major damage to airports, which are not parties to the wage dispute, but also to 'the image of Germany. '

Dusseldorf, which many Dutch people use, seems the worst hit. According to the airport, nearly 59,000 passengers have been duped.