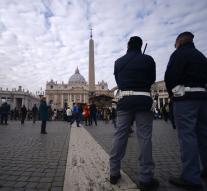 rome - The authorities in Rome have strict security measures announced for the opening of the so-called Holy Year, which begins Tuesday. The airspace above the Italian capital is closed and there is a ban promulgated on making films that contain weapons, even if they are false.

Also Tuesday drones can not fly over central Rome and above Saint Peter's Basilica in Vatican City. It is prohibited to transport weapons, petrol, LPG ​​or methane gas.

The authorities fear that the sight of (fake) weapons can cause panic. The soldiers permanently guard the Metro stations and tourist attractions in the city, or carry semi-automatic rifles.

Pope Francis opens the Holy Year, under the watchful eye of his predecessor Benedict XVI, by opening the Holy Door of St. Peter, which is normally closed. With this special year celebrates the Roman Catholic Church the fiftieth anniversary of the closing of the Second Vatican Council in 1965. The year ends on November 20, 2016.

Expected next 30 million people in the coming year to Rome.