Home / World / Stress on future Iran deal is going on 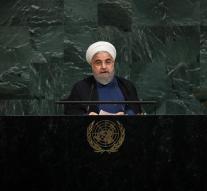 teheran - Iran can immediately resume nuclear activities that have ceased due to the 2015 nuclear agreement. With that warning, an Iranian chief official came after US President Donald Trump had expressed his wish that he might want the agreement.

Tehran promised two years ago to build its own nuclear program in exchange for revoking international sanctions. Trump repeatedly proved to be no fan of the agreement reached under his predecessor Obama.

European allies in the United States have expressed the hope that Trump does not deduct his hands from the agreement. Trump said Wednesday he cut the knot but refused to say what he had decided. He responded with the words 'I decided' on a reporter's question.

'Iran is ready for all possible scenarios if Trump withdraws from the deal,' said the Iranian official on condition of anonymity. Tehran can, among other things, 'resume nuclear work immediately, which has been hampered by the deal. '