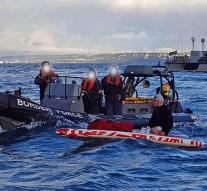 dover - The British Navy has fished a German from the water of the canal which had been lost with his surfboard. The man was planning to sail standing paddling on his board from France to England. About halfway through the busy strait crew of the ship saw him sitting on his board, Sky News reported Tuesday.

The man was suppen: a new water sport craze where you upright paddle on a large surfboard on the water.

' It was not an illegal immigrant, but a German tourist in need, '' said the British Ministry of the Interior. The German was brought to British shores with a naval vessel. Why he needed would make the crossing this unconventional way is unclear.