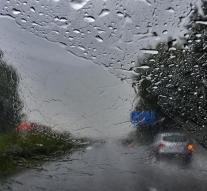 schwerin - The north of Germany is affected by inclement weather. Kiel was a 34-year-old woman killed when a tree landed on her car.

The two people motorway to Schwerin Tuesday morning injured after a hailstorm had turned the road into a skating rink. Several cars were therefore in the skid and collided. Four cars had to be towed away.

Germany is facing great inconvenience due to the weather. So flooded Elbe in Hamburg, leaving some docks were submerged. According to police, the water was 2.73 meters higher than normal.