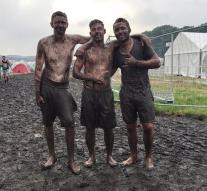 - Visitors to the Hurricane Festival in Lower Saxony also saw the second evening of the event fall into the water by the heavy rains. No action could continue because of the storm.

With 38 artists were on the program, including Prodigy and The Offspring. The performances were moved several times to later in the day before it was concluded that it could not continue.

Friday night, the festival has also been interrupted due to rain and thunderstorms. The storm has also when visitors to the Southside Festival in southwestern Germany, which takes place simultaneously raided. Twenty-five people walked several injuries and five ended up in hospital. The organization of the Hurricane Festival late on the website know to do everything to Sunday, the third and last day, by being able to let go.

All performances were canceled Saturday. The organization hopes Sunday he could execute a program.

At various places in Germany the heavy rains led to flooding in recent days, as in Pfullingen near Stuttgart and Stromberg in Rhineland-Palatinate. At Bacharach in Rhineland-Palatinate derailed a local train by earth and debris were flushed on track. The driver and nine passengers were slightly injured while.