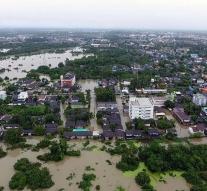 bangkok - The Thai holiday islands of Ko Samui and Koh Phangan have been affected by flooding after unusually heavy rains. The authorities on Tuesday on the islands, as in affected areas on the mainland, declared a state of emergency.

Meanwhile, the rain continues pouring out of the sky. The weather is too dangerous, according to the authorities most beaches to go to sea. They fear that swimmers are engulfed by the waves. There are fourteen people drowned this month in Thailand.

Ko Samui is the most important holiday island. It lies about 450 kilometers south of Bangkok. There are a million tourists each year, mostly in the months of December to April.