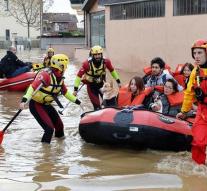 rome - The violent storms that swept Italy in recent days and caused a lot of flooding has passed. Concerns remain for the time being. The water in the Po is dangerously high and is expected to decline until Tuesday.

So far, one man killed, four people are still missing in several regions. In Sicily, police found quite a moped and helmet, the rider is still missing. It will also search for victims in Liguria and Piedmont.

Especially the northwest of Italy has been hit hard. Since Thursday code red was given the highest level of alert. According to emergency services alone in Piedmont over six hundred people lost their homes, the inhabitants of some villages of the surrounding world.

The financial damage caused by the flooding, little is known. The Farmers Coldiretti believes that one half of the orange harvest should be considered lost by the heavy rain in some parts of Sicily. Natural disasters have cost Italy the last decade 14 billion.