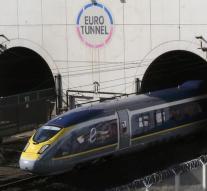 - Rail traffic in the Channel Tunnel between Calais and Dover has been shut down Tuesday afternoon. Cause is a power failure, says a spokesman for the Eurostar high-speed trains between France and England.

Six trains are deleted. In the tunnel there are no trains.

Eurotunnel, the operator of the train, says sit Catenary for locomotives without power.

The schedule will be resumed at the earliest at 18. 00 am (Dutch time).