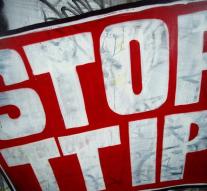 luxembourg - The European Citizens' Initiative 'Stop TTIP' was unjustly rejected by the European Commission in 2014. That ruled the Court of First Instance on Wednesday.

The committee said not to be competent to register the citizens' initiative. The judges find that decision in violation of democratic principles and have void it. 'It is legitimately and timely in a democratic debate. 'The committee can still appeal.

The initiators wanted to achieve that the EU Member States would remove the negotiating mandate on the EU-US Free Trade Agreement with the European Commission. In addition, the EU should abandon TTIP and the CETA treaty with Canada.

In 23 Member States about 3.3 million signatures were collected, of which 110,000 in the Netherlands. This allows the European Commission to make a bill. Moreover, it is not mandatory to do that.

'Today is a good day for democracy,' comments Michael Efler of the Citizens' Committee. The damage caused by the 'arbitrary and political' rejection is unmistakable. He wants a judicial judgment to be much faster soon. 'The 3.3 million EU citizens earn at least one hearing in the European Parliament. ''

In the meantime TTIP is in the refrigerator. CETA is partly in force but has to be completed by the national parliaments for full implementation.