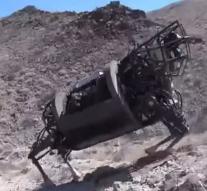 - The development of the so-called killer robots, fully automated weapons systems, can continue. In time, the Dutch armed forces must also be able to purchase these weapons.

That is Autonomous Weapon in an opinion of the Combined Committee to the Cabinet, NRC reported Friday.

The committee believes that the Netherlands next month at the UN talks in Geneva therefore do not have to make hard for a moratorium on the construction of these types of weapons. " These weapons fit to throw in the development of stones in prehistoric times to intercontinental missiles now ", said Chairman of the Board Marcel Urlings. According to him, people have retained control because the weapons are programmed in advance by people and people decide on their deployment.