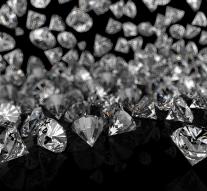 - Ten million dollars worth of diamonds that had been stolen from a jewelry store in New York, prove to be discarded during a move accidentally in the trash.

The owner of the jewelry store in Manhattan told cops last week that thieves had broken into his store and had gone off with some expensive diamonds. Detectives who investigate the matter, found out that the stones are not captured, but they are disposed of by a blundering staff as waste.

A passing security officer discovered the stones between the trash and decided to flog some at another jewelry store. The 47-year-old security guard has been arrested. During investigation it turned out another stone worth 3.2 million dollars to have in his possession.